March 10, 2011January 27, 2016
(Be forewarned – long post) March 9th 2010, I traveled with my school and Me to We, a part of the Free The Children organization, to Kenya. We went to do the stereotypical thing you think of when you hear a bunch of high school students traveling to Africa: to build a school. Or rather, a part of it. There were 13 students, 2 teachers and 1 husband all going together. And the trip was awesome. Truly awesome.
For the duration of the trip I was able to keep a journal where I wrote thoughts and events and kept little mementos. It was my first time to Africa (and hopefully not my last), so I wanted to make sure I recorded everything. I thought in honour of the trip, I would post a few pics and parts of journal entries. Mind you, these entries are laureate quality writing or anything, but they basically kept a record. Today: part one. Enjoy 🙂
March 11th, 1:40 pm
Right now we’re heading through the Great Rift Valley. It’s frickin’ HUGE. Apparently it runs from Kenya to Tanzania and into Uganda as well. There are mountains surrounding it. I’m not sure which is Mount Kenya or even if it’s in this part of the country, but the view is breathtaking none the less. We stopped at a view point where we took pictures and ate lunch (samosas).
After 10 pm
We’re in the Masai Mara [not actually – we were in Salabwek, the community we stayed in], in our tents, under our mosquito nets ready for beds, listening to the convos next to us. … So basically the Mara is awesome. The community of Salabwek is right outside. When we first arrived, we were in the lorry which was behind our luggage van, which got stuck right when we got here. It was kinda funny because there were a bunch of guys trying to push it out of the mud. But basically once our lorry stopped, we were crowded by children and students, primary and secondary. I heard someone say to the secondary school kids, “There are people who look like you in Canada”. I assume they were about me [I was the only black kid on the trip], and that they had the preconceived notion that all westerners were white. Melanie [my Guyanese friend] told me that when she was in the market some one asked her what tribe she was in. The whole experience has been, quite frankly, weird, kinda. Not really the best description but that kinda sums it up. 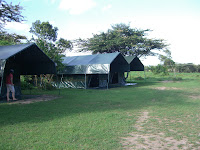 Outline of the camp:

– 7 tents, some doubles, singles and multiples [referring to the amount of people inside]
– One tent for eating
– 3 bathroom outhouse tents
– Two shower tents
– Electric fence surrounding perimeter (mainly to keep out dogs and wondering animals)
– Staff area with kitchen and tents 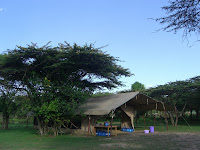 March 12th
…Then later we headed off to the school [we were heading to an outdoor welcoming ceremony]. It was probably one of the most, in an “uncertain, not so sure what to expect, might be overwhelmed, very intimidating, maybe kinda scary”, moments of the trip. Having a mass of small children, between 500-600 approximately, come up to you while singing/chanting a song you don’t know. It was quite random but also kinda touching at the same time, because they were singing a song of welcome for our arrival. 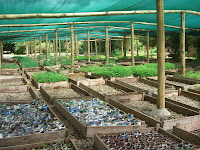 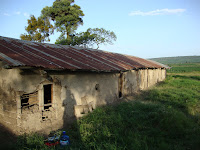 …To be quite frank, I have always felt kind of apprehensive about trips like these, because I feel like they might be just one big pity party. I try to imagine how I would feel and I wouldn’t want a great big group of people pitying me in my current state. Just because I don’t have much, doesn’t mean I want your pity. ← That’s how I would feel. But today caused me to see that truly and honestly, the members of the village, the parents of the children receiving this education, the school staff and teachers, everyone was really grateful for the work FTC and Me to We had done. …
Till next time, ♥ Turtles
thoughts? questions? leave in the comments 🙂
p.s  The glue on Israeli postage is certified kosher. Now you know.